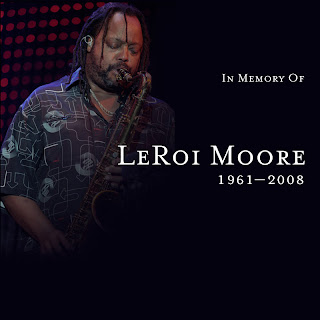 all my excitement about dmb week and davemas came to a grinding halt last night in the t-shirt line at the staples center. i was excitedly standing there with my mom and contemplating buying the event poster, when some random guy told me that i had better buy the poster because leroi died today. i told him to shut up and it’s not funny to start rumors like that. (sorry i was mean to you, random guy in the tshirt line.) i bought the poster. it was the last one.

so, when we got to our seats, i started looking on the internet for any news and saw it on tmz. i was not willing to believe it from tmz, so i went to the band’s site and saw the “in memory of” photo above. utter shock. we were close to the front with other warehouse members, so a lot of the people in our section already knew.

it was nothing short of amazing to be part of the band's celebration of leroi last night. when the guys came out with bartender, it just broke my heart. you could just see the pain etched on all of their faces. i knew from the start it was going to be a difficult show to get through, and it was, but after it’s all said and done, i can’t imagine any other place i’d rather have been. last night’s show was a fitting tribute to leroi – his fans gathered together to honor his life by enjoying his music played so lovingly and with such raw emotion by his closest friends. and yes, i danced and yelled – i wanted to be sure leroi could hear us, wherever he is now, and i wanted the rest of the guys to know that the crowd was out there, giving all the support and love we could.

if there is one message from dmb’s music that really speaks to me, it is to enjoy your life and let your favorite people know you love them every day, because you never know when it’s going to be over. i am certain leroi knew how much we all adored him.

so , leroi, here’s to you. thank you for sharing your gift with us. you will be missed.