oh the joys of being awake at 5am

according to the u.s. geological service earthquake site for recent earthquakes in california and nevada:

no duh. 1 mile wsw of culver city is pretty much right under my house. i was "lucky" enough to be up catching up on some work and i heard the glasses on the shelf behind me rattle for a second or two, then i felt and heard the jolt, then some more rattling for a second or two, then it was done. a mild event to be sure, but, as i said, basically right under my house. i was standing by the time the jolt hit, but it was over so fast, i didn't have time to get to a doorway. and of course, there's there's always that first second or two where you're standing there frozen like a deer in the headlights wondering how bad it is going to get. thankfully, not so bad.
Posted by maltese parakeet at 5:20 AM No comments:

the madness of march

i love march madness. it's been 13 years, but this is still one of the best buzzer beaters in the history of the tournament. it is also one of the best moments of my life.
Posted by maltese parakeet at 10:57 AM No comments:

i love paris in the spring time 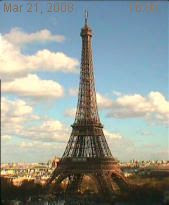 on my google home page, i have the widget that shows the eiffel tower cam in paris. every morning when i start my computer, i save a screen capture from the web cam for some yet-to-be-announced project that i probably will never put together.

anyway, today's picture was just perfect. it's 4 pm on a sunny friday afternoon in springtime paris. doesn't it make you just want to get on a plane?
Posted by maltese parakeet at 8:02 AM No comments:

i work on the 7th floor of a 12 story office building and we get our windows washed by those guys on the hanging scaffold every once in a while. even though you know it's coming, it's always a little shocking to look out your 7th story window and all of a sudden see a person standing there. and there's a weird 21st century etiquette problem. do you look at the guys? do you acknowledge them? this morning's window washing was extra-surreal, as one of the guys was singing (mexican ballads, of course) so i got serenaded for a few minutes while i was working.
Posted by maltese parakeet at 10:08 AM 1 comment:

Posted by maltese parakeet at 12:54 PM No comments: