so, tell me, how long DOES it take to get to lake tahoe?

simple flight to reno, right? wrong. my 5:30 flight was said to be "on time" on the departures board when i arrived at the airport at 3:00. by about 4:00, however, it was cancelled due to "mechanical issues." they , apparently, made an announcement, which could not be heard where i was waiting (ahem, the bar). when i arrived at the gate at 4:30, i thought i had more than enough time. around 5:15, when they still hadn't called my flight, i decided it might be worth asking, what was going on, which was when i learned the flight was cancelled. they could put me on a 9:15 flight tomorrow morning, but my meeting starts at 9. the only way i could get into reno tonight was to get on a flight to seattle, then catch a connection to reno. and an hour and a half direct flight suddenly becomes a five hour marathon. when i arrived in seattle, i was pleased to discover that i had less than 30 minutes to make my connecting flight and the gate where i landed and the gate for my connecting flight were at complete opposite ends of the airport and required me to take a series of four trains to get to the right section of the airport. round about train three i could hear them paging me for last call for the flight. after the fourth train, i got to run up three flights of stairs to get to the concourse and then, of course, my gate was at the complete opposite end of that. so i got to run through the airport in high heeled boots with my luggage flapping, then down another flight of stairs and across the tarmac to the plane. they slammed the door right behind me. the flight on the prop jet to reno was bumpy and we came down through the most amazing rain storm to land. great, i finally got to reno at 10:45. then there's still the hour and a half shuttle ride to south lake tahoe and of course, i was so thrilled to learn that the next shuttle doesn't leave until 12:30...which puts me to the hotel at 2 am...which is roughly 12 hours after i left the office to go to the airport today. i think i could've driven here faster.
Posted by maltese parakeet at 12:08 AM 2 comments:

still waitin' in the airport

left the bar, now at the gate. crazy woman literally running around the boarding area picking up newspapers from chairs and ground. don't know why. i'll probably find out, tho. odds are good she'll be sitting next to me on the plane, as i am a known crazy-magnet.
Posted by maltese parakeet at 5:11 PM No comments:

drinkin' in the airport bar

waitin' on my flight in the airport bar, sitting next to two little old ladies (in their 70s for sure), drinking whisky with beer chasers. i hope i'm that cool when i'm 70.
Posted by maltese parakeet at 3:30 PM 1 comment:

...could a house cause a traffic jam. apparently, someone was moving a house on a truck via the 101 freeway and they got stuck because they couldn't fit it under a bridge. d'oh. so they left the house at the side of the freeway and, of course, because it is a blank vertical surface, some jackhole tagged it overnight. 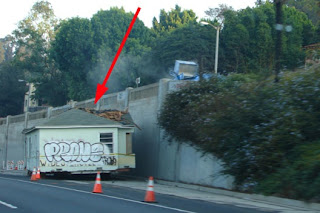 thanks to curbed la for the pic.
Posted by maltese parakeet at 3:30 PM No comments:

Labels: only in la 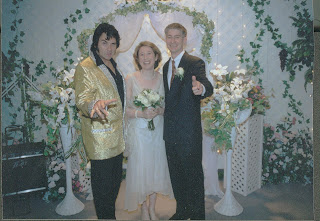