cuteotters.com had this picture on the site today (the photo is by flickr member zeul): 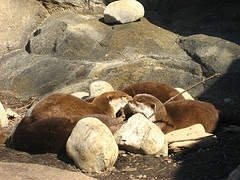 look at the smile on the face of the otter being smooched. it kind of reminded me of this picture of me and my bunk:

[i normally don't like to post photos of myself online, but i thought it was a pretty cute parallel.]
Posted by maltese parakeet at 9:01 AM 3 comments:

Posted by maltese parakeet at 10:08 AM 2 comments:

hfcs on the outs?

economics to the rescue? hfcs may become more expensive as ethanol companies drive up the price of corn (don't even get me started on ethanol), which could prompt soda makers to switch back to sugar. via accidental hedonist.

now if we could only get them to stop using it in every other damn product on the market. this just in, though: trader joes has both ketchup and bbq sauce that are hfcs-free. my momma got me a bottle of ketchup for easter. thank you easter bunny! bok bok!
Posted by maltese parakeet at 8:31 AM No comments:

so it's possible that the artificial sweetener splenda is basically 99% made from hfcs. seriously, people. i tried so hard to avoid hfcs for lent and it turns out i may have been consuming it all along. the irony is, i only use splenda in the regular coffee at my office, but i don't use it in the cappucino. i never used to drink the regular coffee and only started drinking it to replace the cappucino, because the cappucino mix had hfcs in it. can you hear me screaming in frustration?

but while we're on the subject, let's talk about splenda, which apparently has more in common with pesticide than it does with sugar. from the woman to woman article "sugar substitutes and the potential danger of splenda" by marcelle pick, ob/gyn np:

Splenda is the trade name for sucralose, a synthetic compound stumbled upon in 1976 by scientists in Britain seeking a new pesticide formulation. It is true that the Splenda molecule is comprised of sucrose (sugar) — except that three of the hydroxyl groups in the molecule have been replaced by three chlorine atoms. (To get a better picture of what this looks like, see this image of a sucralose molecule.)

While some industry experts claim the molecule is similar to table salt or sugar, other independent researchers say it has more in common with pesticides. That’s because the bonds holding the carbon and chlorine atoms together are more characteristic of a chlorocarbon than a salt — and most pesticides are chlorocarbons.

the article goes on to state:

So, is Splenda safe? The truth is we just don’t know yet. There are no long-term studies of the side effects of Splenda in humans. The manufacturer’s own short-term studies showed that sucralose caused shrunken thymus glands and enlarged livers and kidneys in rodents. But in this case, the FDA decided that because these studies weren’t based on human test animals, they were not conclusive. Of course, there are countless examples of foods and drugs that have proved dangerous to humans that were first found to be dangerous to laboratory rats, and then again, countless others that have not. So the reality is that we are the guinea pigs for Splenda.

even stevia (an herb that is being promoted as a sweetener, of which i have a big jar at home) is not without it's problems, possibly causing reproductive and metabolism problems and, perhaps even, cancer, according to a nutrition action healthletter published by the center for science in the public interest.

sheesh. i give up.
Posted by maltese parakeet at 4:41 PM 2 comments:

it's been a rather successful lenten season in terms of the giving up of the hfcs. it wasn't hard to give up the sugary sodas, i rarely have those anyway. but i really miss the flavia cappuccino drinks at my office. i've been good about looking at labels, too, and actually spit a chocolate chip cookie into the trash after finding hfcs in the ingredient list on the package. for those of you that know me, that's pretty much the absolute limit of my willpower. one thing that i've found that has been suprisingly difficult to avoid is ketchup; it's so innocuous sitting there on your burger or waiting for your fries. i'll admit to slipping up a few times with that. i've also been surprised by how ubiquitous hfcs is in items that are supposed to be healthy. for example, it is the first ingredient in power bars and is in hansen's "natural" sodas.

the main reason that i'm really against hfcs is the political aspect, namely the corporate welfare that is involved. corn subsidies and sugar tariffs make corn sweetener really cheap to use. you can't blame companies for using hfcs when its several times cheaper than sugar. however, you can blame the government and the mega-agricultural companies like adm and cargill who conspire to exploit the corn subsidies designed to protect the american family farmer and fatten themselves at the trough of u.s. taxpayer dollars. seriously, someone should bring a r.i.c.o. suit against these people. for your reading pleasure, here's a really good article on the economic realities of hfcs.

in the meantime, only a few more days of lent to go, but i think i'm going to try to keep up with this.
Posted by maltese parakeet at 4:01 PM 2 comments:

i know i've mentioned this author before, but if you didn't listen to me and still aren't reading the blog of cheeseburger brown's serialized short fiction on a regular basis, you need to get with it, people! the most recent story, tim, destroyer of worlds, just linked in with cbb's novel, simon of space (which was written and posted serially over the course of a few months during the summer of 2005), in the most amazing way. this is some of the best writing out there and definitely some of the best stuff on the web and, amazingly, it's free! i can't recommend it enough.
Posted by maltese parakeet at 5:05 PM No comments: