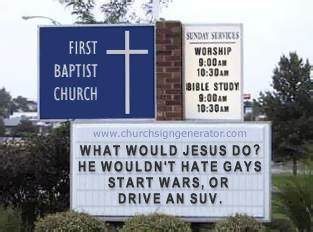 Posted by maltese parakeet at 11:29 AM No comments:

hold 'em to it

so, i think i've found a new policy that we should use to counter the creationists, it's called "hold 'em to it," and we should make them be logically consistent with their beliefs.

this letter to the editor published in the san luis obispo tribune on 11/6/05 describes one application of theory quite eloquently:

Recent news about the avian flu virus has raised concerns from main street to the White House. There is the possibility, even likelihood, that the virus will mutate into a form that can more easily infect humans.

As the president pointed out, a vaccine cannot be made until this evolution occurs. This raises the concern that it may be impossible to create enough vaccine fast enough to protect all our citizens. But there is hope.

Gallup polls tell us that up to 45 percent of Americans don't believe in evolution. Since random mutation is the engine of evolution, these same people must believe that the virus cannot mutate.

Therefore, there is no need to waste vaccine on folks who believe there is no possible threat to themselves -- thus leaving a sufficient supply for the rest of us. Perhaps the president, given his doubts about evolution, may wish to demonstrate his leadership by foregoing vaccination.

This approach has added benefits. Polls also tell us that disbelief in evolution is more pronounced among the less educated, the poor and conservatives. If the anti-evolutionists among these groups were to opt out of vaccination then, through immediate deaths and natural selection, we would reduce poverty, raise educational attainment and become a more progressive society.

what time is it?

i'm a geek, but i absolutely love the "world time server" site:

http://www.worldtimeserver.com/current_time_in_US-SD1.aspx
Posted by maltese parakeet at 12:17 PM No comments:

(it's at about the 20 minute mark if you don't want to listen to the whole thing.)

and yes, contrary to my prediction on 3/26/05, i am still listening to podcasts (and, somewhat remarkably, still blogging)! the addition of a combined aggregator and podcast directory in itunes 4.7 really helped. i barely listen to "commercial radio" anymore. i spend a few minutes in the morning listening to kevin & bean out of loyalty and that's about it. this podcast thing is entertainment on demand, like tivo for your radio, but with better content. my only problem is finding enough time to listen to all the stuff that i subscribe to. if you are not subscribing to podcasts yet, what are you waiting for?

in case you care, here's a list of podcasts i subscribe to. they are definitely worth checking out and you can find them all on itunes:

Too many god damn people in so cal , specifically on the 10 and 60 freeways.

Posted by maltese parakeet at 5:02 PM No comments: