i was at one of my regular meetings downtown last week and when i got to my car in the parking lot i realized that i had forgotten to go to the atm. i had some cash in my wallet, but i didn't have the full $13 parking fee in bills. i didn't want to schlepp all the way back up to street level to find an atm, plus, i really needed to get back to the office quick-like. so, i ended up scrounging in my purse and car and found about $3.00 in coins to just make the parking fee. i pulled up to the attendant and greeted him - it's always the same guy, so we always chat a little. i then passed over the handful of change. he looked at me, and, i kid you not, said, "how's business?"
Posted by maltese parakeet at 6:51 AM No comments:

i don't care if this is viral marketing or not, it's downright amazing to see what a bunch of shepherds in wales can do with some sheep, some leds, a camera and a lot of spare time. 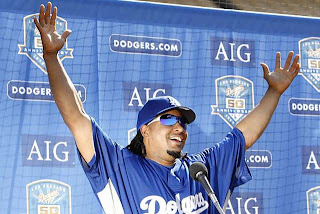 i'd also like to point out the prominent advertising for aig behind rich-ass manny's grinning mug in the photo above. aig has received bailout money from the u.s. taxpayers, from our pockets to the tune of more than 100 billion fucking dollars over the past six months and they got tens of billions more from the government this week. and yet, somehow, miraculously, aig has enough money to sponsor the dodgers? i'm sure that a big corporate sponsorship like that don't come cheap. i mean, los doyers obviously have to raise 45 million to pay manny. recently, congress voted to attach some strings to the tarp funds (the bank bailout money) and passed a law that bascially prohibits employers that receive tarp funds from hiring foreign professional workers on h-1b visas. 12 of the banks that have received tarp funds filed for a combined total of 900 h-1b petitions in 2007 - that's less than one tenth of one percent of their workforce of 1.2 million people. talk about rearranging the deck chairs on the titanic. how does this help the banks get out of trouble or start lending again so that the economy can get back on its feet? it doesn't. it's a bullshit concession to the restrictionists that has nothing to do with anything. congress, if you want to put some strings on how the recipients of corporate welfare spend their tarp money, why don't you prohibit them from spending millions of dollars on wasteful corporate sponsorships? how does that sound? huh? i'm personally offended that my tax dollars are essentially going to fund manny ramirez's $122,950 per hit salary.
Posted by maltese parakeet at 7:13 AM 2 comments: