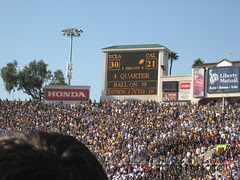 Posted by maltese parakeet at 11:35 AM

If you are to continue being a Bruin fan, which you will, then you must learn to scream without damaging your voice. I suggest some voice lessons, then you'll learn how to hit those high notes without losing your voice for a week.

Does your bunky now need some assisted hearing device after standing next to you?