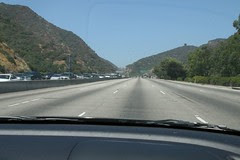 so, on saturday afternoon, we were driving on the 405 in west l.a., between the 10 and the 101. typical bumper to bumper. too many goddamned people in this town. yada yada yada. it turns out, though, that there actually was a minor accident in the fast lane just past sunset and just as we were coming up on it, the chp stopped the traffic in all lanes to let the cars move off to the right. we were one car back from where they stopped the traffic and when the chp officer waved us on, i looked up and saw nothing but empty 405 in front of us. happy to be driving the acura and not the hindenwagen, i cut over one lane to the left to get around the looky-loo in front of me, floored it and took off to get myself some quality alone time on the 405.

bunky was my co-pilot, so he took some shots to document this historic event. as you can see above, hardly anyone in front of us. and not too many people keeping up with me, either, as you can see from the rear view below. it took him a few seconds to get the camera out, so, if you can imagine, it was even emptier than this. 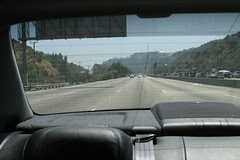 it was nothing short of miraculous and (how lame is this) the most fun i've had in a while. i'm not sure, but i believe i may have said, and i quote, "yee ha!"
Posted by maltese parakeet at 7:09 PM

that is a scene from a stephen king mvie.........bezarrrrr

How nice, you travel with your own photographer.